Filed under: Chevalier’s Books No Comments

Caravan Book Store in DTLA Is Closing After Nearly 64 Years

Leonard Bernstein, proprietor of Caravan Book Store, said at the time his parents started the business in 1954, the area consisted of numerous offices for rail and shipping lines along with a few airlines. The name, Caravan, was chosen to connote exotic travel, a nod to the Silk Road, and the treasures abound from other parts of the world. The store became a center for art and literature. 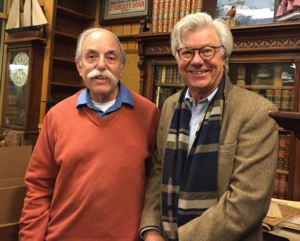 We were standing in the back of the store and just when he finished with the explanation, a woman and three children walked over. One of the kids handed him a bouquet of wildflowers along with a small pouch of seed pods of the same. This Saturday afternoon, February 24th, marked the last few hours for friends and customers to come in and visit with Leonard, at least within the small quarters of limited walk space, and to make a final purchase from the store-closing sale. Sales appeared brisk.

He has often enjoyed the food at Water Grill, conveniently next door. And Philippe’s, home of the French-dipped sandwiches, a bit further away. He mentioned a customer for the longest time wanted to treat him to dinner. Finally one day the customer would not take no for an answer. His host returned wearing black-tie formal and was ready to take Leonard to a restaurant of his choosing. Leonard said the friend really enjoyed the meal at Philippe’s!

A wooden desk sits in the rear of the store, its surface taken up by a stack of books and papers. Leonard extended the pullout shelf attached to the desk. He explained that one day he lay his head down to rest on the shelf. He then heard someone in the store, and it was a woman inquiring how long the store had been around. The woman was Caroline Kennedy. Leonard, in typical form, pointed out that her father visited the Biltmore Hotel (next door) in 1960, when she was a very young child.

On another occasion, word got to him that Sting was in the store. Leonard said he was not familiar with Mr. Sting.

Things in the Financial District shop are similar to how they have been most days for the past 64 years: Customers slowly meander around the tables and shelves stacked high with first editions and rare tomes. The general sense of quiet is punctuated every few minutes by the tick-tick-tick of a receipt printing.

However, many customers arrive with a tinge of sadness. On Jan. 31, owner Leonard Bernstein announced that Caravan will shutter this month. Now a few signs advertise discounts. Angelenos with fond memories keep popping in to chat with the man behind the counter and tell him they’ll miss the store.

Bernstein has a slightly different mindset.

Bernstein, who is 71, admits he’ll miss Caravan, which has been a mainstay in the shadow of Gas Company Tower as Downtown has evolved. In anticipation of closing, Caravan is reducing the prices of many items by 10%-20% through Saturday, Feb. 24. The shop at 550 S. Grand Ave. will shut down on Feb. 28.

Bernstein is soft-spoken and instantly recognizable by his bushy, walrus-like mustache. He partially grew up in the shop, and as a child he spent time there after finishing school. Later he worked in the store and then took over the business.
Caravan stands in stark contrast to its neighbors in the PacMutual Building: a FedEx, Starbucks and the Water Grill restaurant. The store is quiet and warmly lit, overflowing with books. Copies of Harper’s magazine, yellowed with age, are stacked on a shelf. Model ships and aging prints of American history stand on tables and fill other parts of the shop. Abraham Lincoln is particularly well represented in busts and carvings. The work of Los Angeles artists is on display in the window, alongside some older books.