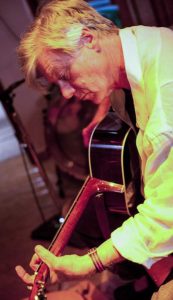 Darryl Holter grew up playing the guitar and singing country and rock and roll songs in Minneapolis, Minnesota.  As a child, his early influences were Elvis and Johnny Cash, then Bob Dylan, then the folk-rock and country-rock.  His current brand of Americana Music draws from country, blues and folk traditions and often tells stories about people, places and events.  In 2008 he formed 213 Music and launched his first self-titled album of original songs.  Two years later he released “West Bank Gone,” an album that highlighted the West Bank (of the Mississippi River in Minneapolis) music scene in the 1970s.  Besides his music, Holter has worked as an academic, a labor leader, an urban revitalization planner, and an entrepreneur.

Darryl Holter is also a historian who has written on Woody Guthrie and a contributor to the Los Angeles Review of Books.

Music has always been in Darry Holter’s life. Having grown up in Minneapolis, the oldest of four, his father listened to country western music on the radio and had taught himself how to play the guitar while serving in the Army Air Corps. When Holter was 6 his dad bought him his first guitar. His father also gave him sheet music from songs they had listed to on the radio. Having been familiar with the tunes, following along on the guitar came naturally.

Darryl was in the 4th grade when he first heard Elvis Presley. He immediately went to the record store and bought “Heartbreak Hotel” and “I Was the One” and played them over and over. Holter soon played community fairs and charity shows all around the state with a show sponsored by a charity organization that my father belonged to. Rock music was still new, so Elvis and Gene Vincent songs were kept at home. At the shows Darryl played they wanted songs like “Cattle Call” and “I Really Don’t Want to Know.”

When Darryl was about 12 a friend who had a sister at the University of Minnesota played him the first Bob Dylan album. Holter found it exciting: basic, with lyrics worth listening to, as opposed to the suburbanized country music he heard on the radio. Around the time of his confirmation, age 14, there was a young (Lutheran) pastor who had brought a genuine folk-singer to lead a little hootenanny around the campfire. They were all sitting around singings songs that had come out of the civil rights movement in the South: “Kumbaya” and “We Shall Overcome,” etc. When they passed the guitar to young Darryl, he played Dylan’s version of “Baby Let Me Follow You Down” The response was positive and he came away more interested in the folk scene.

I remembered the controversy when Dylan went electric. A lot of folks
were upset, but not me. – Darryl Holter 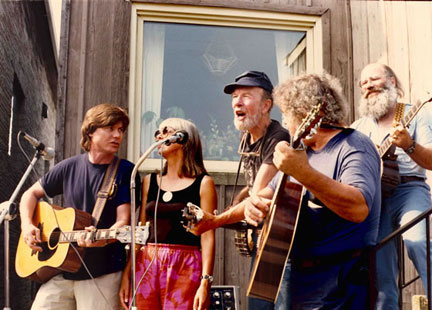 Holter went to the University of Minnesota for college and as the Vietnam war escalated, he became involved in the anti-war movement. This led to protest songs by people like Pete Seeger and Phil Ochs. In graduate school, in Madison, Wisconsin, he worked as a teaching assistant and got involved in organizing a union. Soon he was doing old labor union songs and writing a few of his own. He worked for the AFL-CIO in Wisconsin and played in a few concerts with Pete Seeger, Arlo Guthrie, Joe Glazer, and a close friend from Milwaukee, Larry Penn. He played at picket lines and rallies from one end of the state to the other. Holter wrote about 40 songs over the course of several years. Taped on a little cassette and then tossed into a drawer. He wrote 40 songs that no one had ever heard.

Then finally he decided to take the best songs and recorded a CD. Holter teamed up with Ben Wendel and together they selected the ones to record. As they neared the end of the recording sessions, Darryl had the urge to write new material. Out of this desire came “Don’t Touch My Chevy” and “Blues in Your Pocket” and they added them to his first album.

I met Ben Wendel and we hit it off well. He listened to about 20 of my songs and we selected the ones for the CD. Rehearsals at Local 47 were really fun for me because I had never heard any of my songs with anyone playing except me. The songs are like my little children and I could see them developing before my eyes (and my ears) under the direction of Ben and the skills of Tim, Nate, Billy, and later Greg, Nels, and Julia. Recording at Capitol Records in Hollywood was an experience to remember for me. As we neared the end of the recording sessions, I experienced this strange desire to write new songs. It was as if this first group of songs was going out the door and a new batch needed to be created. – Darryl Holter

Darryl continues to record having recently released his new Roots & Branches album in 2018.