In spite of all that we have learned since the opening of the Woody Guthrie Archives in 1996, there is one thing that we shall perhaps never know: the extent of the possibilities for musically imagining and re- imagining Guthrie’s songs. This is, of course, a good thing. Those who have been fortunate enough to go through the Archives will know that there is hardly a scrap of musical notation to be found there. Guthrie wrote lyrics — close to three thousand of them — and only a relative handful have been musically transcribed. Even fewer have been recorded. Often we don’t know what musical setting was in Guthrie’s head when he wrote his lyrics; sometimes we can make a pretty good guess from their form (Hey, do you reckon that “Big City Ways” is based on “Brown’s Ferry Blues”?). Sometimes, Woody was good enough to tell us (e.g. “To be sung to the tune of ‘Streets of Laredo’”). The open-ended musical possibilities have proved to be one of the most dynamic aspects of Nora Guthrie’s project to give new life to her father’s songs by inviting contemporary songwriters into the Archives to come up with new and imaginative musical settings. Billy Bragg and Wilco, Jay Farrar, Rob Wasserman, the Klezmatics, Jonatha Brooke, the Dropkick Murphys, and Del McCroury are just a few of those who have been part of this ever-growing project. 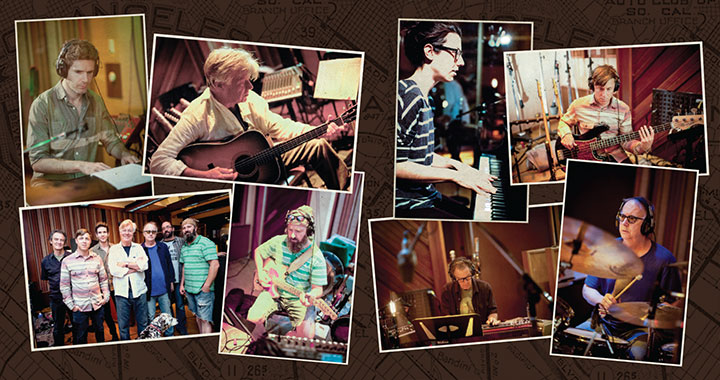 But even before Nora began her work, a few musicians were fortunate enough to get their hands on Woody’s lyrics and provide the settings for what otherwise might have simply remained words on a page. Martin Hoffman, perhaps, was the first, with “Deportees” in the late 1950s. Shortly after Woody’s death, Country Joe McDonald was given the lyrics to “Woman at Home,” which he performed at the second Guthrie memorial concert at the Hollywood Bowl in 1970. All of these post-Guthrie “collaborations,” as it were, raise an important issue: the danger of the musical ossification of Guthrie’s songs. We know that if someone sang (say) Paul McCartney’s “Yesterday” to a new tune, there might be more than a bit of an outcry. This would not be surprising. But the question follows, then: “Why should there be any upset if someone writes a new tune to “Deportees”? The answer is, There shouldn’t be. Woody did not write the tune — Martin Hoffman did. Over fifty years later, when Lance Canales and the Flood got their hands on Woody’s lyrics … well, check it out for yourself at http://www.lancecanalesandtheflood.com/deportee-s. Still, some may continue to see the Hoffman version as the “authentic” one, just as, in future, the Bragg-Wilco “Birds and Ships” or the Jonatha Brooke “My Flowers Grow Green” may well have earned the dubious status of The Authorized Version.

That is, unless musicians like Darryl Holter keep working. His new album, Radio Songs: Woody Guthrie in Los Angeles, 1937-1939, offers more than a highly informed engagement with Guthrie’s KFVD songs; it also offers a raft of new musical settings that post-date virtually every received version, including Bragg and Wilco’s “California Stars” and “One by One,” as well as Brooke’s “My Flowers Grow Green.” Holter is not afraid to throw away even the settings to some of Guthrie’s own recorded versions, as in “Oklahoma Hills” and “I Ain’t Got No Home.” New chord changes, new tempos, and new voices abound — there is indeed a newness to the entire project. With the invited voices of Sara Watkins (“California Stars”), Ani DiFranco (“I’m Looking for that New Deal Now”) and — with an almost mesmerizing stillness — Julia Holter (“My Flowers Grow Green”), a wholly transformative women’s dimension is brought into the Guthrie mix, so often in danger of being over-laced with testosterone.

Few musicians are as well equipped as Holter to offer this look into Guthrie’s Los Angeles years. A social and labor historian as well as a fine guitarist and singer, Holter was awarded a 2009 BMI-Woody Guthrie Fellowship, which brought him into the Archives to explore Guthrie’s L.A. songs and other writings. With William Deverell, he was one of the organizers of the Guthrie Centennial Conference at the University of Southern California, which was organized under the rubric: This Great and Crowded City: Woody Guthrie’s Los Angeles. (Holter and Deverell have also edited a forthcoming book of essays based on the conference presentations.)

So as you read Holter’s notes to the songs on his album, you are taken into some thoughtful history — about, for instance, the specific background to Guthrie’s “Los Angeles New Year’s Flood” or the ambivalence underlying Guthrie’s responses to FDR and the California governor Culbert Olson in “Looking for that New Deal Now.” This meta-textual dimension also informs the professionally produced DVD that accompanies the CD. It is, in a sense, a teaser, since it covers only about half the album’s songs. In between the studio footage, which shows the whole band in action, Holter is seen in his historical commentator’s role, whether in a filmed radio interview or on the corner of L.A.’s Guthrie Square, as a troubadour-cum- tour guide. One wishes that the DVD itself could be a full-length production, as it beautifully and comprehensively captures both the dynamics of the recording sessions and the historical bases of the songs.

But, in the end, the CD stands on its own, driven by a cracking set of musicians doing full justice to the range of emotions inscribed into Guthrie’s lyrics. Behind Holter is a steady rhythm section grounded by Dave Kemper’s drumming and Billy Mohler’s electric and acoustic bass. Gabe Witcher provides the fiddle and string arrangements and producer Ben Wendel also covers the keyboards. The band’s musical core, however, is in the energetic interplay between lead guitarist Timothy Young and Greg Leisz, the star player who provides both a sweet pedal steel and a growling, sliding lap steel that gives Ry Cooder a run for his money and firmly lodges the songs in their rightful Los Angeles setting. In front is Holter himself, whose vocal delivery is first and foremost a commitment to the clarity of Guthrie’s lyrics, but in whose nuances — such as the ascending-and- descending phrasing of the words “I ain’t got no home” — might lie a world of heartbreak.

One final thing: a portion of the album’s proceeds is donated to the Woody Guthrie Archives-BMI Fellowship Fund. That alone is good enough reason to purchase it — but fortunately, Holter and his colleagues provide more reason than that.
Darryl Holter, Radio Songs: Woody Guthrie in Los Angeles, 1937-1939. 213 Music, 2015.