Any discussion about American folk music should begin with Woody Guthrie. He died in 1967 and since then, if anything,
his star has been rising. We have had many Woody Guthrie cover versions and now the underrated Country/Americana singer Darryl Holter offers a full CD tribute, plus in the future, a book.

The new album looks at the time Woody Guthrie spent in Los Angeles between 1937- 1939. It is clear from the collected songs that Woody Guthrie was in an important songwriting period when he was in L.A. Darryl Holter understands the songs, and new arrangements/production work very well. We also need to admire the fine steel guitar playing on the CD by Greg Leisz. On Darryl Holter’s internet site the singer makes an important point; that the big urban folk revival of the 1940s and 1950s really began with Woody Guthrie in the 1930s. Back then Guthrie landed a spot on a radio show which he co-hosted with Maxine Crissman who was known as “Lefty Lou”.

Not the “Do, a deer, a female deer” from The Sound Of Music, the Woody Guthrie song Do Re Mi which begins Darryl Holter’s wonderful album is somewhat different. The title refers to money and the hardships of being a farm worker back in the 1930s in America. Woody Guthrie’s politics were on the left but he wasn’t a modern day champagne socialist living in a big house, he was a realist who cared passionately about the problems of the working man. Quite a few singers/bands have recorded Do Re Mi including Ry Cooder with a wonderful polka romp in the 1970s and Woody Guthrie’s original version with his guitar remains powerful today. Darryl Holter wisely doesn’t try to copy this, instead we get a country arrangement with steel guitar, a fiddle ending, a commercial edge and even a slight reggae feel.

On the CD Darryl Holter has three female guests: Sara Watkins duets on California Stars, a song with a melodic feel, Ani DiFranco is on Looking For That New Deal Now, and best of all we get Julia Holter’s fragile, delicate, moving vocal on My Flowers Grow Green. Darryl Holter doesn’t sing on this track, which builds to a kind of pure beauty. All ten songs on the album are gems, but of special note is Oklahoma Hills, with it’s ‘echo of Phil Spector’ production. A very original take on a great tune.

Darryl Holter’s disc ends with Talking Dust Bowl Blues and a simple acoustic version, which is the closest we get to any of the original songs.

Darryl Holter’s album is an important work by a singer prepared to take a few risks for his art.

The highly original takes on these timeless songs will be enjoyed by many Woody Guthrie fans along with fans of country and Americana. Many of the songs get a kind of ‘country face-lift’. 2015 is an incredible year for country music fans already and we can add Darryl Holter’s new CD to the list of must have CDs. Darryl Holter + Woody Guthrie = something kind of special. 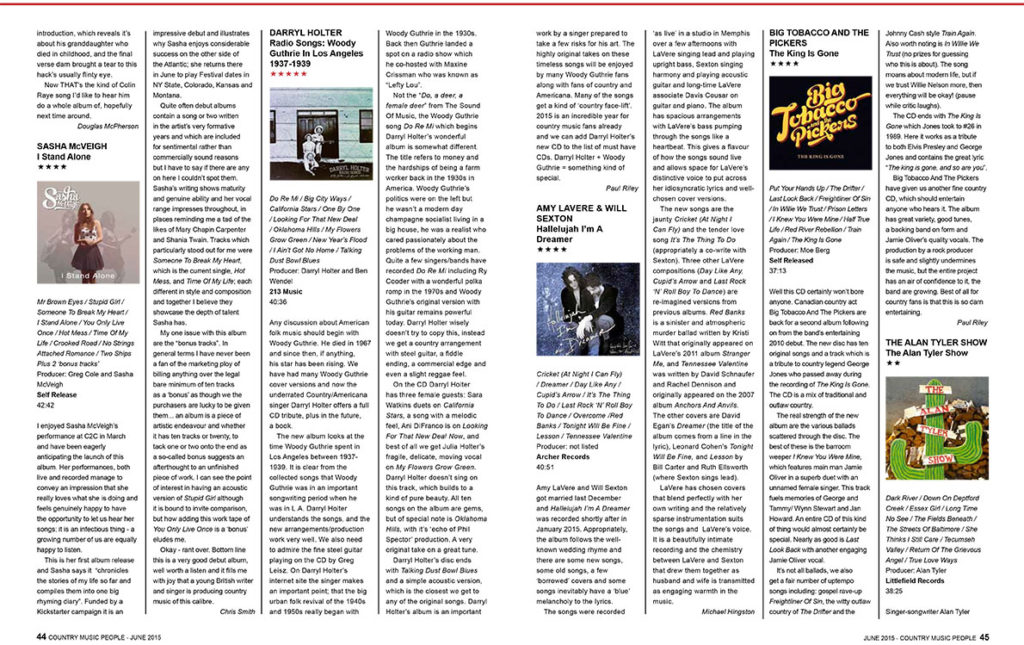