A Test of American Traditions: Timothy Snyder’s “On Tyranny”

AS AN OWNER of an independent bookstore, I have noticed the increased interest in books about Donald Trump and the rest of us. The first wave arrived during the course of the campaign — mostly satirical broadsides written and purchased by people who never believed Trump would be elected. After the election, a new group of books arrived that sought to explain what most of us never thought would happen and offered sobering assessments of what might be done. J. D. Vance’s Hillbilly Elegy, a best seller even before the election, does a wonderful job of explaining what propels the Trump phenomenon among white working-class folks. Gene Stone’s The Trump Survival Guide offers ideas on how we can continue to live through the man’s reign. But the book I like best goes behind the sociological analyses and beyond the practical coping techniques to offer a strategy for individual and collective resistance to the looming threat of tyranny and authoritarianism, which is more probable than most of us care to believe.

Timothy Snyder’s On Tyranny: Twenty Lessons from the Twentieth Century, currently ranked third on The New York Times Best Seller List for paperback nonfiction, is not really a book at all. It’s really a manifesto: an opinionated and passionate call to action — short, easy to read, and small enough to fit in your pocket, so you can carry it with you wherever you go. Last weekend when I was walking with my daughter and grandson in the West Village in New York City, I popped into a little bookstore called Three Lives & Company, on the corner of Waverly and West 10th Street. I chatted with the genial store owner, pulled out my copy of On Tyranny, and asked him if he was selling it. “We’re selling a lot of copies. Some people buy 25 or 30 and give them to friends to read. One girl told me she leaves copies on the subway.” That is the mark of a manifesto — and it just may be the manifesto we need.

In his prologue, Snyder defines “tyranny” in terms of the American experience:

In founding a democratic republic upon law and establishing a system of checks and balances, the Founding Fathers sought to avoid the evil that they, like the ancient philosophers, called tyranny. They had in mind the usurpation of power by a single individual or group, or the circumvention of law by rulers for their own benefit.

Snyder is a European historian at Yale who has written a dozen books on the Holocaust, Central Europe, the Balkans, and the Baltics in the 19th and 20th centuries. His most recent books include the critically acclaimed Black Earth: The Holocaust as History and Warning and Bloodlands: Europe Between Hitler and Stalin. Perhaps because he is a scholar of European history, Snyder has little affection for the American Exceptionalism argument — the long-standing and widespread notion among American writers that our country remains largely immune to the wars, political upheavals, and economic calamities that plagued Europe. Deeply familiar with democratic experiments, and their eventual failures in Europe after World War I, World War II, and the collapse of the Soviet Union, Snyder detects dangerous trends in American politics that may be less visible to most citizens who cannot believe that our country, with its system of checks and balances, could succumb to illiberalism or authoritarianism. 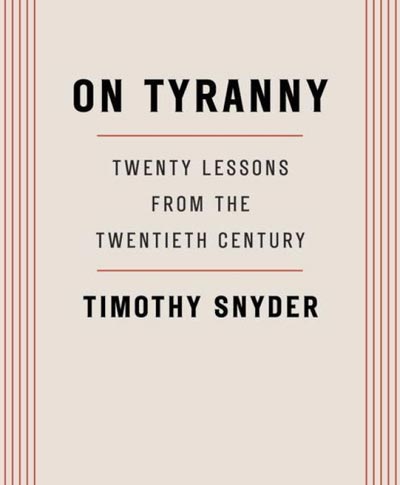 It is precisely this complaisant attitude that Snyder wants to expose as erroneous and anti-historical. In doing so, Snyder offers an affirmation of the value, even necessity, of understanding history. He opens his manifesto with this statement: “History does not repeat, but it does instruct.” The 20 lessons he extracts from the last century provide instructions to help us think more carefully about what we, as individuals and groups, are doing to influence the political direction of our institutions. At the same time, Snyder provides a damning refutation of anti-historical ways of thinking about politics, including the idea of “the inevitability of history” — the notion that the present is merely another step in the direction of a certain, usually desirable future. Equally dangerous is another anti-historical fallacy, “the politics of eternity,” a masquerade of history, “self-absorbed” and “free of any real concern with facts,” that longs for a mythical past that never really existed. At the heart of Snyder’s analysis is one hope: that we can learn from the past to protect our future.

Many of his lessons focus on what we can do to prevent homegrown authoritarianism. We must defend institutions because they do not protect themselves. After Hitler’s Nazis won free federal elections in 1932, many reasonable people did not believe that the budding tyrant would actually create a one-party dictatorship. “The mistake,” writes Snyder, “is to assume that rulers who came to power through institutions cannot change or destroy those very institutions — even when that is exactly what they have announced that they will do.” In order to prevent this, we must, among other things, support a multiparty system and election rules. In the European context, several democracies that emerged after the World Wars I and II soon collapsed when a single party assumed power — usually by means of some combination of an election, emergency powers, and a coup d’état. We’ve been taught that checks and balances protect us from one-party rule, but today the less popular party controls all three branches of government and does not want to relinquish its power. Writes Snyder, “We can be sure that the elections of 2018, assuming they take place, will be a test of American traditions.”…

Review Continued at at LARB Book Review by Darryl Holter 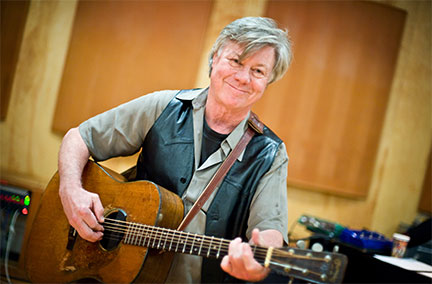