Combining the deft touch of both a lyricist and a musical historian, Darryl Holter recreates the fabled West Bank folk and roots music scene in Minneapolis of the 1960s, which spawned a young Bob Dylan and where Bonnie Raitt recorded her first album. Drawing from his own North Country roots experiences, Holter paints a vivid tableau of what it was like back then, with songs such as The Mixers, a sad but engaging ballad set in a popular West Bank bar; 5 am, a spirited song about a chance encounter in a dreary all-night coffee shop; or the title track, which chronicles some of the West Bank personalities who are no longer with us.

A journey through the Minneapolis that spawned the likes of Bob Dylan and Koerner, Ray and Glover, Holter’s gruff voice and the contributions of musicians like Ben Tech and Greg Leisz make this a solid effort from Holter, who writes a lyric like someone who has lived what he’s writing about. – John Heidt www.VintageGuitar.com December 2010

We dug his self released debut last year, but this time around, in addition to Darryl Holter’s compelling originals, he covers John Koerner in a tip of the hat to his Twin City folk/blues roots. Very much in the spirit of the scene that spawned Dylan, Koerner and others you never heard of but would have enjoyed, this crack singer/songwriter makes you wonder why he flew under the radar for so long. An accomplished set that will reassure you mature songwriting is alive and well, this is first class adult, contemporary pop that raises the bar and changes the game. A winner throughout.”
– Chris Spector, Midwest Records, Chicago, IL, August 20, 2010

A review written for the Folk & Acoustic Music Exchange

This CD is named for a small music phenomenon that’s gone almost unnoticed and nearly unremarked until now. The ‘West Bank’ was a roots/folk scene existing in Mineapolis, Minnesota, in the 60s, and it spawned one rather outstanding alumnus: Bob Dylan. Hence, there are very strong stylistic similarities to what Holter is here doing and what a young Robert Zimmerman laid down decades ago. More, in the generous liner notes, Holter relates a bit of oral history of the times and other famous figures (Spider John Koerner, etc.), stories interpolated into the title song, a Mayall-ish documentation affair.

West Bank Gone carries a kind of narrative throughout, almost like a long day chronicled, 24 hours filled with myriad adventures, and Holter pulled up Tom Petty keyboardist Benmont Tench as a sessioneer, who turns out a great sit-in, perfectly indexed. The feel and atmosphere are definitely stylistically of times gone by, updated perhaps as far as the 70s but no further. Elements of the Byrds slip in, especially via Greg Leisz’s lap and pedal steel guitars, and one detects a bit of Glass Harp, who hailed from nearby Cleveland and, in retrospect, seems may have caught more than a little of the West Bank vibe.

Holter’s voice is unpolished and proletarian, perfectly matching that bottom heavy segment of the old days and old ways. Birthday in Beertown reminds a bit of JP Jones, and Holter’s cover of Koerner & Murphy’s Friends and Lovers recalls Harry Nilsson (his non-rock material, of course) by way of Van Dyke Parks and Randy Newman. A particular diamond hidden in the roster, The Trouble Is, should become a standard in the rock catalogue. The lyrics are dead-on, uncompromising, rough, and the music propulsive, with a weighty bottom and a driving tempo. Thus, the New Orleans horns in the intro to its follow-on cut, 5 A.M., almost make ya blink, save that the transformation is pulled off in Mike Nesmith fashion and slips right into the ears. 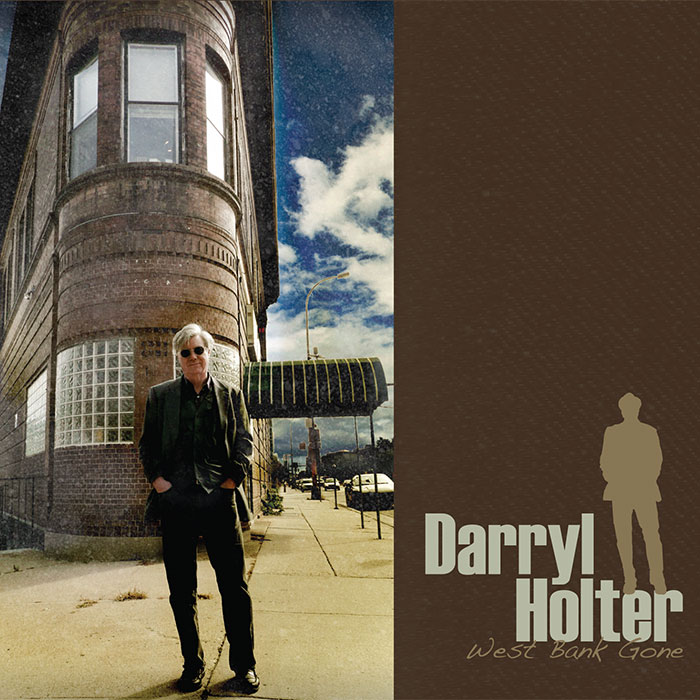 Darryl Holter, West Bank Gone (213 Music)
Combining the adroit touch of both a lyricist and a musical historian, Los Angeles-based singer-songwriter Darryl Holter recreates, in both words and music, the fascinating saga of the storied “West Bank” folk and roots music scene in 1960s Minneapolis, Minn., which inspired a kid from Hibbing named Zimmerman, as well as the bluesy trio of John Koerner, Dave Ray and Tony Glover, among others, and was also where Bonnie Raitt recorded her first album.

Drawing from his own youthful North Country roots experiences, Darryl Holter paints .an eloquent tableau of those halcyon days, with image-loaded songs, such as the perfectly modulated title composition (a heartfelt homage to a local bar and its bohemian patrons – including the esteemed, ill-fated poet John Berryman – some of whom also proved performers with a future) along with a cleverly written revisiting of Johnny Cash’s 1950s hit “Ballad of a Teenage Queen,” here called “Last Chorus of the Last Song,” and a rousing (Holter is ably aided and abetted throughout by the likes of keyboardist Benmont Tench, lap and steel guitar legend Greg Leisz and percussionist Nate Wood) and an oddly spirited reflection titled “5 AM,” a song about a chance meeting at an all-night coffee house. It is, oddly enough, followed by Holter’s desultory version of “Girl from the North Country,” one of Dylan’s finest early efforts.

Darryl Holter and crew also cover three other, less well-known songs – channeling Gram Parsons’ Flying Burrito Brothers staple “One Hundred Years from Today” in fine fashion as well as the soulfulness of Jay Farrar on his revelatory plea “Back into Your World” and it’s back to the future with a chilly-wind blues, co-composed by the aforementioned Koerner, called “Friends and Lovers.” Other formidable Hotter originals include the love anthem “Two for Each Other” and the nostalgic “Breakfast in Beertown.”
– GvonT , Sing Out Magazine

Darryl Holter, West Bank Gone (213 Music)
Being from Minnesota, the land of Bob Dylan’s early origins, might make music some sort of birthright, because for Darryl Holter, that roostsy, narrative style seems to come quite naturally. On this, his second album, this northern plains native son plows deeply into his homegrown environs and comes up with a winning set of reflective story songs that borrow heavily from formative encounters with early musical heroes. Indeed, the spirits of Dylan, Woody Guthrie, Spider John Koerner, and other rugged troubadours are invested heavily in this material, both in the descriptive style and in its attachment to middle America. Perhaps that’s why Holter sounds so assured; in recalling his early admiration of the people and places that birthed his most precious musical memories, he offers an autobiographical glimpse into the dimly-lit clubs and coffee bars where friends would gather, musicians would bond, and relationships were spawned from the same fused experiences.

As a result, songs like “Two For Each Other,” “The Mixers” and “Birthday in Beertown” take on an added resilience in both their assertive stance and the tender connection. Freely mixing folk, blues and country, he surveys traditional templates throughout, from the freewheeling stomp of “The Trouble Is” to the brassy surge of “5 AM.” Telling too, is his choice of covers, as expressed in a beautifully evocative take on Dylan’s “Girl From the North Country” and the celebratory surge of Gram Parson’s ringing “One Hundred Years From Now.” Having that kinship to his forebears etched in each of these tracks makes West Bank Gone a vital travelogue intrinsically clasped to the heartland. – Lee Zimmerman

From Blogcritics.org by: David Bowling September 18, 2010

Darryl Holter has a lot of years under his belt and by his own admission has never made a living through his music. That may change as his second release, West Bank Gone, is one of the better and creative independent releases of the year.

He is a singer/songwriter now based in Los Angeles but he reaches back to his Minnesota history to create one of the more innovative albums in quite a while. The album’s title refers to the fabled West Bank folk and roots movement which took place in and around Minneapolis during the 1960’s. Bob Dylan emerged from this scene and it is where Bonnie Raitt created her first album. In addition there is a cast of characters which have faded into the musical mists of time.

Holter has used these early memories to create a series of songs which present the history of this time period. The lyrics are universally excellent and they bring this lost period of music history to life. He also sets them against some catchy and melodic music. He finishes the album by recording four cover songs which fit the overall theme well.

His music is basically folk lyrics fused with a light country sound. His voice, however, can best be described as sixties folk which fits the intent of this album. It is a bit gruff at times but gets the job done and is a good vehicle for presenting his stories.

The title song is a keeper and on it he introduces the listener to a cast of long gone characters including Ross the harmonica kid, poet John B. Working, Dave Snaker Ray, Willie Murphy, and street artist Vicki who used to paint portraits. The music is more edgy than one would imagine as the electric guitar work is excellent. “The Mixers” is a ballad that takes one to a popular bar of the day. “5 am” is a tune about an encounter in an all night coffee shop.

He chose his non-original material well. “Back Into Your World” by Jay Farrar, “Friends and Lovers” by Spider John Koerner & Willie Murphy, “One Hundred Years From Now” by Gram Parsons, and Dylan’s “Girl From The North Country” all are well done and enhance his own material.

West Bank Gone is a nice and nostalgic trip down memory lane whether you are from the area or era. It is an album worth exploring.